The Movimiento for Justice in el Barrio (The Other Campaign New York) announced the Campaign „Bringing down the Prison Walls!”

During this campaign there are various creative actions to participate:

How can I participate? 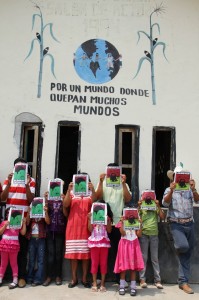 Worldwide many groups and individuals have associated themselves to the call for protest. On MATERIAL you’ll find posters / images / flyers and texts to download and print out. You can also paint and write something yourself. Be creative, take part, colorful and manifold.

All pictures, photos, videos and texts of your protest can be sent via e-mail to libertad-patishtan@riseup.net or posted on our facebook page. We will spread and forward them to various groups of Ya Basta Net (Germany), of the Other Campaign, to independent media groups and other media, such as magazines and newspapers.

During the global week to liberate Alberto Patishtán & Francisco Sántiz we invite you to add Alberto as your friend on Facebook and share your Message of Solidarity (e.g. Text/Fotos)! Furthermore you can post President Calderón your Opinion as comments on his Facebook Page! LIBERTY FOR ALBERTO & FRANCISCO!

protest actions in front of embassys and consulates

We’d like to join the call of the Movimiento por Justicia en el Barrio New York and invite you to protest actions in front of mexican embassies and consulates, as well as to other decentralized actions.

On MATERIAL you’ll find posters / images / flyers and texts to download and print out. BEYOND THESE YOU CAN FIND SOME TEXTS THAT CAN BE READ OUT AT EMBASSIES OR CONSULATES.

If you’d like to publish dates and events, write a comment on THIS PAGE or contact us at libertad-patishtan@riseup.net. You can write protest letters to the mexican embassy in your country as well. You’ll find the letter of Movimiento por Justicia en el Barrio HERE.